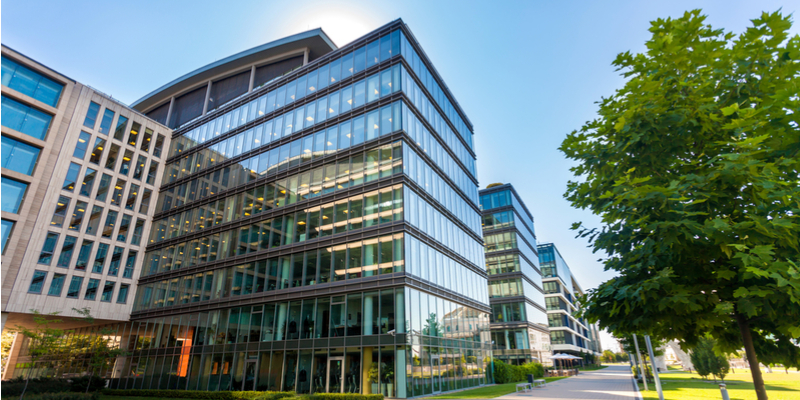 An air-cooled chiller, cooling tower, and air handling unit all work together to provide a constant stream of cool air conditioning to a building. So, how does it work? Allow us to explain the process as simply as possible.

Depending on the type of chiller utilized for the system, it will be located on the roof or underground in the basement. Generally, chillers kept on the roof are considered “air cooled,” while chillers residing in the basement are “water cooled.” The goal of either system is to remove heat from a building. The main difference is how each system gets rid of excess heat. Air cooled chillers rely on fans to get rid of heat, while water cooled systems use two large cylinders (an evaporator and a condenser) to do the job.

This chilled water is moved into small diameter pipes that lead towards the system’s AHU and fan coiling units (FCU) to supply air conditioning to a building. Both the FCU and AHU are box-like structures equipped with fans that are tasked with sucking air in and then pushing it back out. As the air is sucked in, it blows across the cooling coils and the temperature is changed before it is pushed back out into the building. The chilled water that moves through the AHU/FCU, which is tasked with absorbing heat in the air as it moves over it.

The chilled water now turns warm, as it takes on the heat of the air. This warm water is transported back to the evaporator thanks to what’s known as a return riser. Here, a refrigerant

removes the heat and transfers it to the condenser. As a result, the water is chilled again, and ready to recirculate throughout the building and repeat the process of taking on excess heat.

When the condenser water enters the condenser, it is around 5 degrees cooler than when it exits the condenser because it collects heat along the way. A pipe wall separates the refrigerant from the condenser water, but the heat is able to transfer between the wall. From here, it moves to the cooling towers where heat is expelled before cooling water is returned back into the system, ready to remove more heat.

The cooling tower is often placed on the roof, although it can be located elsewhere. It is the final resting spot for unwanted heat removed from the building. Equipped with a powerful fan, the cooling tower has constant air blowing throughout the unit. Condenser water reaches the cooling towers and is sprayed into the air stream, and the cool ambient air comes into direct contact with this stream. As a result, the heat transfers into the surrounding air and is ultimately removed from the building, as well as the cooling tower. From there, the condenser water is ready to move back to the chillers and start the process of cooling heat all over again.

Cooling Power offers air-cooled chillers, air handlers, and cooling towers for rent. We can help you install an effective system for permanent or temporary purposes. Contact us today to learn more.